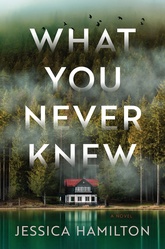 What You Never Knew

Idyllic Avril lsland, owned by the Bennett family, where their 100-year-old cottage sat in acres of forest. Forty-year-old June Bennett believed that the island had been sold after the summer of her father's disappearance when she was only 12. It's months after the shocking death of her older sister May, that June finds out that the cottage was never sold. Avril Island is now hers.

Still reeling from grief, June travels back to Avril lsland in search of answers. As she digs, she learns that the townspeople believe her father may in fact have been murdered rather than having abandoned his family in the dead of night, as she was led to believe by her mother. And that's when she begins to notice strange things happening on the island.

“Jessica Hamilton brings the spooky thrills in her debut, an involving spin on the gothic cabin-in-the-woods mystery.”—Andrew Pyper