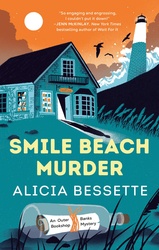 When Callie is laid off from her reporting job, she returns to her hometown of Cattail Island and lands a gig at the local bookstore--the same one where she found comfort after her mother died.

In fact, the anniversary of her mother’s infamous death is approaching. Years ago, Teri Padget tumbled from the top of the lighthouse. As islanders are once again gossiping about the tragedy, devastating news strikes: the lighthouse has claimed another victim. Eva Meeks.

The police are calling it suicide, but Callie does not believe Eva jumped any more than she believes her mother did--especially because Callie knows that before her death, Eva had dug up a long-forgotten treasure hunt that could have put a target on Eva’s back.

“A whirlwind of a story that delights with sand, spindrift, and Blackbeard’s treasure. This book is, literally, a beach read!”—Laura Childs