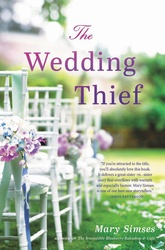 Sara is a Type-A. Her younger sister Mariel is the opposite: bohemian, semi-employed, and recently engaged. The two sisters haven't spoken since the night Sara realized something was going on between Mariel and Sara's boyfriend, Carter Pryce. And now Mariel is about to marry Carter, the man Sara still loves.

When Mariel asks Sara to stand in for a bridesmaid who has to cancel at the last minute, Sara realizes it's the perfect cover to unravel the nuptials and win Carter back. Sara begins to slowly sabotage Mariel's picture-perfect wedding, but when she crosses paths with David Cole, he challenges her self-image. Will Sara realize what a bridesmaid-zilla she's become in time to fix the damage before Mariel's big day?

"If you've ever wanted to sabotage a wedding—and who hasn't?—you should definitely read this book. In fact you should read it anyway, because it's funny, smart and highly entertaining."―Dave Barry