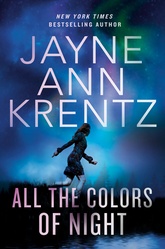 All the Colors of Night

Finding truth in the Fogg

North Chastain possesses a paranormal talent that gives him the ability to track down the most dangerous psychic criminals. When his father suddenly falls into a coma-like state, North is convinced it was caused by a deadly artifact that traces back to the days of a secret government program known as the Bluestone Project. North knows his only hope of saving his father is to find the artifact. He is good when it comes to tracking down killers, but to locate the relic he’s going to need help from a psychic, Sierra Raines.

North and Sierra soon find themselves at the scene of the Incident, which occurred decades ago in Fogg Lake. The pair unearths shocking truths about what happened that fateful night, but they are playing with fire.

"The combination of romance, danger, mystery, and the occult is sure to sate Krentz’s fans. Readers will be eager to see where the series goes next."—Publishers Weekly